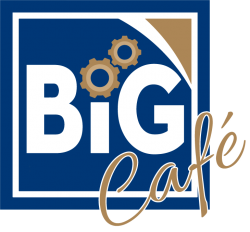 Are you a local entrepreneur looking to network, engage with other entrepreneurs and help solve business problems over a free cup of coffee?

Join us at the BIG Café!

This one-hour structured business innovation session allows us to create a space for peers, mentors and advisors to help other local entrepreneurs over a cup of coffee.

How it works: Each month two local entrepreneurs have six minutes to present a prepared overview of their businesses followed by 20 minutes of Q&A. Between presentations, we refill our coffee cups before moving on to the second presentation. That’s it! No obligations. No strings attached.

We look forward to seeing you there!

Watch the videos of our previous BIG Café presenters: